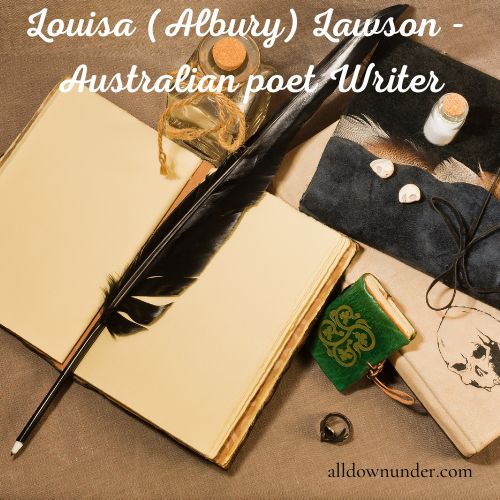 Louisa (Albury) Lawson was an Australian poet, journalist and publisher during the period 1848 – 1920.

LOUISA LAWSON HOLDS two important claims to fame besides her talents as a journalist and poet. Louisa was instrumental in helping to give women the vote in Australia. She’s often called the “mother of womanhood suffrage.” She was also the mother of one of Australia’s most beloved writers, Henry Lawson.

Louisa Lawson was born Louisa Albury on 17 February 1848 at

Guntawang near Mudgee, New South Wales. From her earliest days, Louisa rebelled against what she felt were the unjust restrictions of the times.

The only way Louisa could leave her family home was to marry and so at age 18 she married Niels Hertsberg Larson. (He later changed his name to Peter Lawson.) The family was very poor and often on the move as Peter Lawson followed opportunities for work. With Louisa’s urging, they eventually settled down on a small farm, however Peter was often away for longer and longer periods of time on contracting jobs. Louisa was left alone to do the hard work of caring for the family and farm and enduring the loneliness.

In 1883 Louisa left her husband and moved to Sydney where she started up a boarding house. There she met a variety of people including political radicals and social reformers and immersed herself in the issues of the times.

Her son Henry later moved to Sydney and was re-united with his mother. In 1887-8 he and his mother edited the Republican, a publication calling for all Australians to unite under the ‘ flag of a Federated Australia’. The Nationalist replaced the Republican, but only lasted for two issues.

In 1888 Louisa began a new publication called The Dawn: A Journal for Australian Women. It was the first of its kind – written, edited and printed by women and featured interests important to women. It offered advice, discussed politics, and contained short stories, news of women’s activities around the world as well as fashion articles and sewing patterns.

Louisa joined the Womanhood Suffrage League in 1891 and became one of Australia’s early feminists. To support the effort, she allowed the League to use The Dawn presses to print their literature for free and worked tirelessly fighting for woman’s rights. Henry Lawson’s exposure to his mother’s political and journalistic efforts helped shape his writings.

Louisa is credited with helping make women’s vote a precondition of a federated Australia and was hailed as the “mother of womanhood suffrage” when in 1902 women were given the right to vote. She continued to publish The Dawn and push for women’s rights for the next 17 years.

Back to Australian Writers